Law Of Attraction For Money, Health, Love & More: 5 Hacks To Master The Power Of Habit

Want the law of attraction to manifest more love, wealth, body, and intimacy? Utilize the power of habit with these 5 hacks.

Let’s analyze the rules of attraction as they apply to you before getting into the power of habit. From 1 to 10, 1 being the least to 10 being the most, how would you answer the following questions?

If your score is 30, then fantastic. Still continue reading as what I share with you could be an opportunity to make things even better!

How long does it take to form a habit? 14 days for it to really stick. If you really want to make a change of habit that enables the law of attraction to manifest more love, wealth, body, and intimacy, then you have got to be passionate about where that change of habit is going to get you.

What most people find is that despite reading The Secret, learning a new technique, watching an informative video, or having the absolute best intentions to make an adjustment that enable the law of attraction work even better in their life, they revert back to how they were before. The power of habit weighs on the negative end of the scale that brings them down because they never truly committed.

E.g. a person decides to eat more real foods, yet a few days later they revert back to having the potato chips (Pringles?) that are irresistible.

An individual decides to stop drinking to reduce the calories so they can reduce or ideally eliminate their beer belly and even have a six-pack one day. First day, fantastic. Second day, great. Third day happens to be on a Friday and all their friends are going out and they revert back to drinking again. A change of habit that doesn’t make it past three days isn’t a true change of habit.

A person learns a new money making technique yet despite spending hours per day watching TV and using social media can’t find the time to implement it and improve their life.

A single person desperately wants to have love in their life but can’t find the time to go out and socialize with people.

EACH EXAMPLE HERE (AND THE MILLIONS OF OTHERS THAT ARE HAPPENING RIGHT NOW) ARE EXAMPLES OF HABIT LOOPS. E.g. a person takes a few steps in a new direction and they are pulled back, as if by an incredibly powerful force (the power of habit) to the way they were before. And their progress is blocked and the rules of attraction are prevented from working fully in their life. The power of habit can be both negative and positive to a person’s well-being.

What if we could change this? The rules of attraction would work much better, easier, and faster in your life.

These are 5 hacks to solve the “habit loop” and allow the Law Of Attraction to work faster and easier in your life, that you can do right now!

Let’s start with the area of your life that is most important. Is it money, health, romance, relationship, happiness, enjoyment, or something else?

The #1 first step is to define precisely what you most desire.

Excellent start, and the law of attraction will bring the speaker what they desire in each of these cases.

The person who has a goal to lose some weight will continue to have the goal. Excellent goal. But, their body won’t fit into a few sizes smaller.

And the person who is trying to lose weight will continue to try. If you’ve ever “tried” to life up your keys (don’t lift them), just try, you will see that it likely won’t result in a slimmer belly.

Additionally, the term “lose weight” touches on a concept we have that when we lose something, we want it back.  Ever lost your keys or your wallet. You want it back and now.

Let’s leverage the power of the rules of attraction and manifestation and define in detail and with words that will bring what you most desire into your life.

For example, an individual desired to gain 10 kilograms. He weighed 80kg and desired to weight 70kg of slim, fit muscle (e.g. reducing the belly or body fat)

He wrote down his desire as, “I weigh 70kg of slim, fit and solid muscle with excellent health in all areas by May 8, 2018 [e.g. a specific calendar date].”

Now, apply this same concept to your specific desire, which may be in any area of life. Write down that you have what it is you desire, in as much detail as you can identify now, by a specific calendar date.

Well done on completing the prior step!

Now, relax, smile, be even more present, breath deeply, and let’s do the next most important hack.

Ask yourself (and answer the question), what thoughts and actions happen before you would do something to achieve what you desire (and start the momentum where the law of attraction absolutely maximizes your results)?

For example, a man desired to have a wonderful romantic relationship with a woman with the precise qualities he most desired.

He didn’t meet many people in his work or where he lived, so common sense suggested he needed to get out.

Doing this activity, he observed prior to going out the thoughts in his mind:

“I’m too busy with other things.”

“I don’t have the time right now.”

“It’s too much work to get dressed and drive there.”

He observed what he did prior to going out:

He felt more stressed and with tension.

He felt more tired, lethargic and without energy.

He started doing work he had to finish, often extending beyond the time he would have gone out.

He felt sad and chatted with friends about it.

You may be thinking, “He’s blocking the law of attraction from working!” Yes, you are right.

The only way for him to turn his attitude around to get the rules of attraction working in his favor is to utilize the power of habit and make a change that sticks.

Before continuing to the next hack, ask yourself (and answer) the same questions he did. Be honest about them. We all have processes we do repeatedly and if you aren’t getting what you want, there is room for IMPROVEMENT so you can enjoy the fantastic life with what you want manifesting as fast as possible!

A cornerstone is defined as “an important quality or feature on which a particular thing depends or is based.”

In this step, you will ask yourself and identify what you think would be the one key thing that the other blocking actions and thoughts are based on.

For example, in the prior example, the young man wanted to have a relationship and yet he needed to go out more.

He had many thoughts and actions that were blocking the law of attraction from bringing him what he truly desired.

Then, he asked himself, “What is the cornerstone of all these counterproductive beliefs and actions?”

As a result, he identified “I want to be productive, use my time wisely and accomplish things with excellence.” E.g. he thought of all the other things he had to do, and subconsciously thought he was wasting time by going out and having fun.

The first cornerstone, or core deep belief or thought that could be leading you to do the things and have the thoughts prior to not doing what you should be is perfect.

Write it down and continue to the next step (you can always come back and revise later).

The number one thing most people do (and I’ve been guilty of this many times) is to set too ambitious goals. E.g. for the individual who wants to have a wonderful relationship, he had set goals of going out, meeting everyone in the party, connecting with and leading to romance an incredibly beautiful woman with the qualities he most desired.

While ambitious and awesome, this goal actually blocked him even more from going out!

First, it’s dependent on external events for his success. Second, it’s a lot of things to accomplish. Third, it’s beyond his current comfort zone. Fourth, it’s emphasizing the distance between where he is now and where he wants to be (and indirectly suggesting he isn’t successful, which makes him feel even more unmotivated).

Identify ONE activity you can do that would bring you forward to accomplishing what you most desire that is EASY for you and IN YOUR COMFORT ZONE.

For example, for this individual in the example, he identified that while he had a lot to do, he could be social when he went to lunch at a restaurant which had many young people. He felt very comfortable there, knew the people working, loved the food, and he had to eat anyways (he confirmed).

As he thought about the attractive young women who he frequently saw there (but didn’t speak with), he smiled. He could even do some work on his cell phone to stay there longer, enjoy a wonderful lunch AND meet women in a place where he felt very comfortable.

(Fast forward several weeks, the lunch place also had live music at nights, and with the positive momentum of the first adjustment, he attended at night and started to meet women with the qualities he most desired. He even adjusted his thought process to see going out and recharging as getting him even greater results when he returned to do the many other things he had to do.)

Most people are relying on how the other person will react to determine their success. 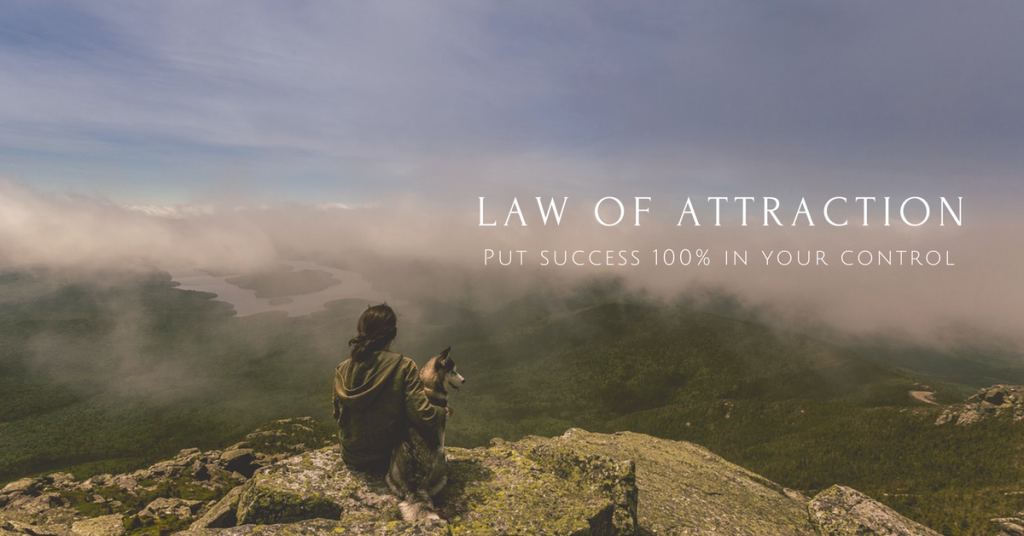 For the law of attraction to manifest the fastest, put success 100% in your control. Start utilizing the power of habit.

E.g. if she likes me, if she talks to me, if she gives me her number/asks for mine, if we connect, if we go out, and so on, then “I will be successful.”

We all want to be successful.

However, putting our success entirely in the hands of another means we truly have only some control over it. If she had a bad day, felt sick, was stressed or any number of other issues, then she wouldn’t do what we wanted.

By putting success 100% in your control, you develop positive momentum, results, and allow the power of habit to manifest what you desire faster and easier.

The simple step is to focus on the action and not the result.

E.g. in the example of the young man who wanted to have a fantastic relationship, he started out focusing on the action of saying hi and smiling to 3 or more women when he got lunch. He felt comfortable there, and he felt good saying hi and smiling. Of course, as he did this, the momentum lead him forward naturally to conversations and more.

The key is that he STARTED with a simple action in HIS COMFORT ZONE, that brought him FORWARD and created positive MOMENTUM.

Now do the same for yourself. Write it down.

And most important, DO IT!

To your success in harnessing the power of habit,

GET FREE MINI-COURSE: "THE 3 KEYS TO CONSISTENTLY UPGRADE ALL AREAS OF YOUR LIFE"